HBO has recently released a version of “All the Way,” the movie version of the Broadway play with Bryan Cranston, who also starred in the movie. Cranston was superb in both, bringing Lyndon Baines Johnson to life in a fascinating look at the events that brought us the Civil Rights Act of 1964, and the Voting Rights Act of 1965. As you might expect the movie was able to deal with the events in more detail. The Civil Rights Act of 1964 was signed by President Johnson on July 2, 1964 and has been the subject, within the past few years, of much discussion about what the real role of L.B.J. was in securing that passage. The Play, and the HBO movie, show LBJ’s role as critical. The best perspective, in my view, comes from LBJ biographer Robert Caro, who has written four books on LBJ, including the one that covered the period after the assassination of President Kennedy, and the assumption of power by LBJ. The book “The Years of Lyndon Johnson: The Passage of Power” gives us a detailed look at Johnson’s masterful handling of the powers of the Presidency, and more specifically the passage of the Kennedy legislative program, including the Kennedy filed Civil Rights bill.

Johnson’s handling of the immediate problems of the legislative gridlock that had not only bottled up the Civil Rights bill, but the Kennedy tax cut bill, all of the appropriations bills, along with the development of a budget due in a matter of weeks, showed, through Caro’s masterful telling, how Johnson was a legislative master with no peer. The lessons taken from this period, in light of the gridlock in Washington, have been much discussed with the LBJ revival. What happened, and what about those lessons?

Johnson’s great talent lay not just in static vote counting, but in realizing what connection those votes had to each other, and how those connections could be leveraged to achieve legislative success. As he approached the problem facing the Kennedy men Johnson realized a very fundamental error that had been made by them. The Kennedy team, against prior advice from Johnson, had filed the Civil Rights legislation while other major legislative efforts were underway. (Primarily the tax cut legislation, but the appropriation bills were languishing, and other key legislation.) Johnson recognized that the “legislative traffic” would be used by that other master of legislative  strategy Senator Richard Russell to ultimately derail the Civil Rights bill by holding all other legislative bills hostage. Caro explains Johnson’s thoughts:

“He tried to explain to Sorensen how the Senate works: that when the time came for the vote on cloture, you weren’t going to have some of the votes you had been promised, because senators who wanted civil rights also wanted—needed, had to have—dams, contracts, public works projects for their states, and those projects required authorization by the different Senate committees involved, and nine of the sixteen committees (and almost all of the important ones) were chaired by southerners or by allies they could count on. And then, should the authorizations be passed, the projects would require appropriations, the approval of the actual funding for them, and the Appropriations Committee was stacked deep with southerners and their allies—who took their orders from Richard Russell. Or senators needed to have other, non–public works legislation vital to their states, and such legislation often faced other, but also southern-controlled, congressional barriers.”

The LBJ respect for Richard Russell, Senator from Georgia and leader of the southern bloc, and his knowledge of how Russell operated, is evident. It was a critical part of the ultimate success of this legislative effort. LBJ explained to Katherine Graham why the timing of the Civil Rights Bill was so important: From Caro:

“We’re going to have to do it now,” he told Katharine Graham in another call. “If we don’t, they’re going to start quitting here about the eighteenth of December, and they’ll come back about the eighteenth of January. Then they’ll have hearings in the Rules Committee until about the middle of March. And then they’ll pass the bill and it will get over [to the Senate], and Dick Russell will say it’s Easter and Lincoln’s Birthday, and by the time he gets them [the civil rights bill], he will screw them to death, because he is so much smarter than they are.”

1) Getting the bill released onto the House floor, as it was bottled up in the Rules Committee. While it could not stay bottled up forever that was not necessary. It just needed to stay bottled up long enough to make the legislative calendar more conducive for Richard Russell in the Senate.

2) Getting the Kennedy tax cut legislation released by the Senate Finance Committee and its powerful Chairman Harry Byrd. Getting to Byrd was a nearly impossible task, and that task could never be achieved by brute force or threats. (As related by Robert Caro in the attached video the Kennedy people asked LBJ why they could not just go around Harry Byrd in Committee; Johnson answered “because Harry Byrd has 9 votes”(out of 17); when asked how he knew that Johnson replied “because Harry Byrd ALWAYS has 9 votes”) The price for Byrd’s support? Bringing in the budget below $100 billion. With little time left, and the budget  nearly complete, the vastly “trimmed” budget stood at $102.5 billion. LBJ  would have to impose the “Johnson” treatment on recalcitrant Cabinet secretaries to bring that number in below $100 billion.

3) Mastermind the overcoming of the southern filibuster on the Civil Rights Bill. Cloture in 1964 required 67 votes, not the 60 needed today.

LBJ managed to bring in a budget of $97.9 billion, cutting a deal with Byrd that freed the Kennedy tax cut bill from almost certain death. Obstructions still sprang up within the Finance Committee, but LBJ now had Byrd there to help clear them away. Byrd was co-opted, not by threats, but by the fawning and total attention paid to him by LBJ. The President recognized that the power of Harry Byrd could not be overcome, and paid the political cost of progress. His actions on this bill prevented Richard Russell from holding the bill hostage to the Civil Rights Bill. He not only did it, but did it on a nearly impossible calendar.

Finally Johnson, in his grasp of the tally, recognized that in order to break the Richard Russell filibuster he was going to need Republican votes. He whipped floor manager Hubert Humphrey relentlessly on tactics and strategy. From Caro:

“Summoning Humphrey to the Oval Office, Johnson told him, Humphrey was to recall, that “You have this great opportunity now, Hubert, but you liberals will never deliver. You don’t know the rules of the Senate, and your liberal friends will be off making speeches when they ought to be present.” “I would have been outraged if he hadn’t been basically right and historically accurate,” Humphrey was to say. And, he was to say, Johnson was being accurate about him, too. “He had sized me up. He knew very well that I would say, ‘Damn you, I’ll show you.’ ” And then “having made his point he shifted the conversation and more quietly and equally firmly he promised he would back me to the hilt. As I left, he stood and moved towards me with his towering intensity: ‘Call me whenever there’s trouble or anything you want me to do.’  “He knew just how to get to me,”

LBJ did indeed, in his tough way, know how to motivate people. And he pushed Humphrey on the issue of getting to Everett Dirksen, the Republican Senate Leader. From Caro:

“Boy, that was right,” Lyndon Johnson said in a phone call afterwards, as Humphrey would recall. “You’re doing just right now. You just keep at that.… You get in there to see Dirksen! You drink with Dirksen! You talk to Dirksen! You listen to Dirksen!”

When the filibuster was broken the tally showed that without Dirksen it never would have happened:

“The cloture motion was passed, by a 71–29 vote, on June 10, after a filibuster of fifty-seven days that was the longest in Senate history. Twenty-three Democrats voted against that motion; forty-four votes from the Democratic side was all it got. But, thanks to Dirksen, twenty-seven Republicans voted for it; only six, including Goldwater, remained opposed. There ensued another series of floor fights over proposed amendments to the bill, before its passage, 73 to 27, came on June 19. Thousands of people crowded around the Senate wing of the Capitol, cheering and applauding senators as they came out. When Humphrey emerged three hours later, they were still waiting to cheer him.”

The historical record is pretty clear on the outsized role played by LBJ in the passage of the Civil Rights Act of 1964. Without his leadership, and his strategic brilliance, it is likely that Senator Richard Brevard Russell would have indeed “screwed them to death” and sustained the filibuster. Johnson’s mastery extended to seeing how ALL the legislative pieces fit together like a jigsaw puzzle, and taking the steps necessary to make sure that puzzle was constructed properly. His friend, patron, and foe Richard Russell summed it up for a colleague: From Caro:

“You know,” Russell said, “we could have beaten John Kennedy on civil rights, but not Lyndon Johnson.” There was a pause. A man was perhaps contemplating the end of a way of life he cherished. He was perhaps contemplating the fact that he had played a large role—perhaps the largest role—in raising to power the man who was going to end that way of life. But when, a moment later, Richard Russell spoke again, it was only to repeat the remark. “We could have beaten Kennedy on civil rights, but we can’t Lyndon.”

An earlier Caro book on LBJ was titled “Master of the Senate,” and LBJ, despite a few years in the Vice Presidency, showed through this process that he was indeed still “The Master”

The lessons of vote counting, and whether todays pols can learn from Johnson, for another day.

The Atlantic story on “How LBJ saved the Civil Rights Act” is here. 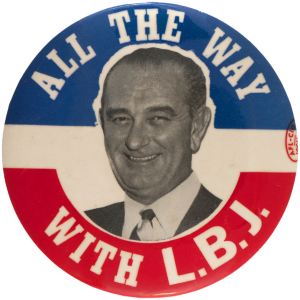