The Methuen Inaugural Then and Now 2020 Edition

Congratulations to Mayor Elect Neil Perry, who will be sworn in Monday January 6, 2020 at Methuen High School at 6:00 p.m. Mayor Perry will be Methuen’s sixth Mayor of the modern era following the Charter change that brought us the Mayoral form of government in 1993. Methuen changed to a Town Administrator/Council form in 1973 and then a Town Manager/Council form of government after abandoning Town Meeting. After the 1993 change Methuen had its first Mayoral election since Samuel Rushton won the office before 1920. Mayors, by Charter, are limited to three two year terms. Let us take a look at how those six Mayors won office.

In 1994 Dennis DiZoglio led the ticket in the very large primary field, and then defeated a young upstart City Councilor named William Manzi in the final election. Mayor DiZoglio won three terms as Mayor, and during his tenure the school system built the three K-8 grammar schools (Marsh, Tenney, and the Timony schools.) Mayor DiZoglio had served as the Planner in Taunton and Peabody, and after his three terms were served in Methuen he became the General Manager of the MBTA for Planning and Development, and he retired as the Executive Director of the Merrimack Valley Planning Agency. 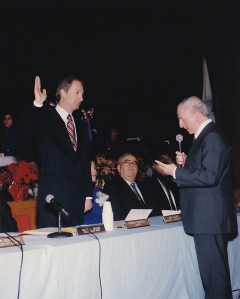 Mayor Sharon Pollard won the first of her three terms by defeating City Councilor Larry Giordano in her first run for that office. Mayor Pollard was a former State Senator, and a former Secretary of Energy for the Commonwealth of Massachusetts, working for Governor Dukakis. A little remembered fact is that then City Councilor Steve Zanni was in that preliminary election for Mayor. 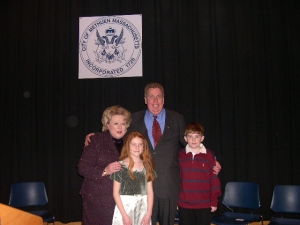 Mayor Pollard posing with the Manzi family at her Inaugural

Following Mayor Pollard was Mayor William Manzi III. (Yes, the same one that lost to Mayor DiZoglio.) In my initial race I defeated Ellen Bahan for the office. I also served three terms, and was very happy to secure the state financing for the Methuen High School project, becoming one of the first High Schools in the Commonwealth to be approved for funding under the newly created state system of funding local school infrastructure. Our financing package enabled Methuen to complete a $100 million project without requesting a Proposition 2.5 override.

Speaking to the crowd at the Tenney School in 2006. 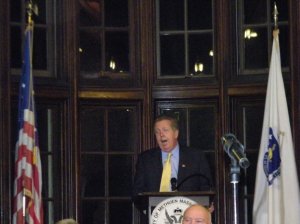 The third Manzi Inaugural, in the Great Hall, Searles Building.

Mayor Stephen Zanni defeated Al Dinuccio in 2011, following Mayor Manzi in office, and twice won re-election. Mayor Zanni’s tenure included the completion of the Methuen High School project, and the total renovation of Nicholson Stadium, including brand new artificial turf. Mayor Zanni had served Methuen as a School Committee member, as well as being a Methuen City Councilor, and past Chairman of that body. A little remembered fact on Mayor Zanni is that he was a member of the Lawrence School Committee before moving to Methuen.

The Four Mayors of the modern era pose at the Inaugural of Mayor Zanni in January of 2012.

With Mayor Zanni at his second Inaugural, at the Methuen Memorial Music Hall, 2014.

With Mayor Zanni at his third Inaugural, with City Councilor Ron Marsan.

Mayor James P. Jajuga succeeded Mayor Zanni, winning election in 2017 while running unopposed. Mayor Jajuga is a former State Senator, has served as the Massachusetts Secretary of Public Safety,as well as having a long and distinguished career as a Massachusetts State Trooper. As a State Trooper Mayor Jajuga headed the Regional Drug Task Force. Mayor Jajuga also served as a Methuen City Councilor before becoming Mayor. Mayor Jajuga served one term, opting not to run for re-election in 2019. During his tenure the Methuen Rail Trail was completed, a major infrastructure project connecting Methuen to the regional trail system. 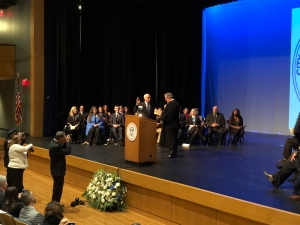 Mayor Jajuga is Sworn in as Methuen’s Fifth Mayor of the Modern Era. 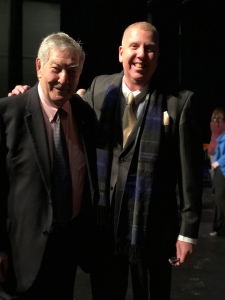 Mayor Neil Perry led the ticket in a four way primary in 2019, defeating Dan Shibilia and Don Riccio, and leaving City Council Chair Jennifer Kannan as his opponent in the general election. Mayor Perry defeated Councilor Kannan, succeeding Mayor Jajuga and becoming Methuen’s sixth Mayor of the modern era. Mayor Perry started his career as a teacher in the Methuen public schools, and followed that with a 30 year career in management at Raytheon. He holds an MBA from Southern New Hampshire University, and is a distinguished alumni of Central Catholic High School. Mayor Perry officially assumes his duties on January 6, 2020. Best wishes for a very successful term for the Mayor and the newly elected City Council.

1 Response to The Methuen Inaugural Then and Now 2020 Edition