Muhammad Ali has passed. As a boxer his achievements were staggering, but his force of personality and personal charisma brought him status that far exceeded boxing, making him a worldwide icon. Although Ali today is beloved it was not always so, as he stood up for what he believed, and became one of the flash points of change in American society, refusing to be inducted into the U.S. Armed Forces due to his religious beliefs,  splitting American public opinion over his cause and beliefs. That split was reflective of the changes occurring in the United States in the politically charged Vietnam era, and it spilled over into the boxing ring.

Ali, known then as Cassius Clay, took on a fearsome champion, Charles “Sonny” Liston in 1964 for the heavyweight championship. Ali was 22, and Liston was one of the heaviest punchers ever seen in the division. Ali’s combination of foot and hand speed befuddled Liston, who would not get off his stool to start the seventh round. The very next day Ali announced his conversion to Islam, starting a personal and boxing journey that left a huge footprint, in America and the world.

When Ali refused induction into the U.S. Armed Forces as a conscientious objector he was stripped of his title and refused a boxing license. His absence of 3.5 years, in the prime of his career, not only robbed us of watching a man at the peak of his abilities but caused him financial hardship, and brought into question whether his boxing skills would still be there if and when he returned. When the U.S. Supreme Court ruled, unanimously, in Ali’s favor on the draft question he readied a return. When he entered the ring against undefeated champion Joe Frazier it was two undefeated champions facing off for the first time. That fight, billed as “the fight of the century” was so much more than a boxing match. Fans split along racial and political lines in choosing who to root for, with the more “conservative’ folks lining up with Frazier, with pre-fight discussions on the relative merits of the fighters often spilling into other non-boxing areas. Ali, as always, created a firestorm with his anti-Frazier tirades, building gate and interest, but creating scars on Frazier that never quite healed. Despite administering to Frazier one of the worst beatings I have ever seen in a boxing ring Ali lost the fight, as Frazier would just not stop coming, knocking Ali down in the 15th round with a savage left hook. Ali got right up, but both men left a little piece of themselves in the ring that night.

Ali regained his title with a shocking KO of George Foreman in Zaire, Africa, deploying some of the same verbal tactics against Foreman that he used on Frazier. And he fought an epic third battle with Frazier, the “Thrilla in Manila” in which both men were totally spent by the end of the fight, an Ali victory by TKO. Both men, at that point, were effectively finished as boxers, having left every last bit of themselves in that ring in Manila. Ali and Frazier, in a boxing sense, will be forever linked. They both showed heart and courage beyond any reasonable expectation.

Ali left boxing, but he never left the worldwide stage, even with Parkinson’s disease. And as we say goodbye to him it is fair to say that for some of us the world will never be the same without him. He stood up when it would have been so much easier to sit down. He entertained, but he also taught. He left a footprint so large that it cannot be forgotten, as an athlete, and as a man. RIP Muhammad Ali. 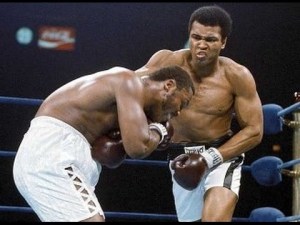 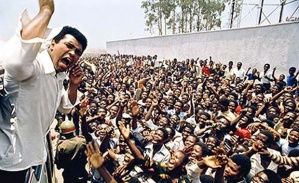 This entry was posted in Sports and tagged Muhammad Ali. Bookmark the permalink.