Some biographical information on Chief Gallagher.

Chief Gallagher was hired as a full-time police officer by the Town of Seabrook in 1989 and attended the 88th NH Police Academy. In his 29 year career in Seabrook he has served as a Patrolman, Police Prosecutor, Patrol Sergeant, Detective Sergeant in charge of the Services Division, Lieutenant, Deputy Chief of Police, and Chief of Police.

In 1994 Chief Gallagher was given a Medal of Honor by the Manchester Union Leader for his actions in pulling two crash victims from a burning car.

In his efforts to better connect with the public, Chief Gallagher began regular Coffee with a Cop events at various locations in the town which gave the public an opportunity to meet the officers serving their community. Chief Gallagher also revived the Seabrook PD K9 program in the fall of 2017 with the addition of K9 Henry to the agency. 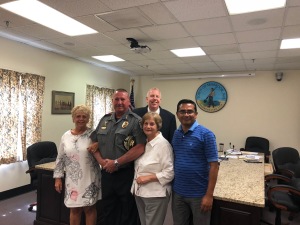 This entry was posted in Seabrook and tagged Chief Michael Gallagher, Seabrook Police. Bookmark the permalink.